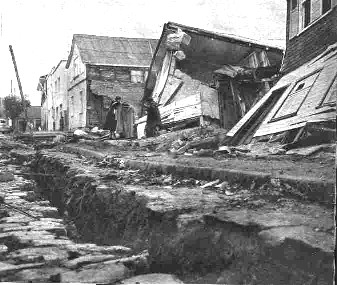 In 1960, it happened the bigger earthquake registred of th history. It happened in Valdivia and it reached an intensity of 9.5 on the Richter scale.

It killed most of 2.000 person, 3.000 were hurted and most of 2.000.000 lost theirs houses. This earthquake changed the course of the rivers and it created new lakes, the geography of all South America was modified by this earthquake.

But this catastrophe caused tsunamis which swept the coast of Japan, Hawai, Philippines and the EEUU West coast, too. It was, undoubtedly, one of the most terrible catastrophes.