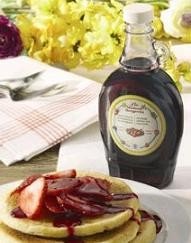 People think canadian food is poor and bored, but tourist who visited Canada are surprise of the variety and tasty in his dishes.

The canadian cuisine is influenced by english and french cuisine, in addition to have international gastronomy.

canadian food is very varied: Quebec cuisine is influenced by french cuisine, there are dishes like meatloaf, fish soup, baked beans, sweets cakes or panackes with maple syrup; in the grasslands include their meats; in British Columbia highlights the salmon; in the Northem Territories highlights the haddock or trout Arctic: in the Atlantics coast include excellent seafood and Ontario offers rich fruit and vegetables.

There are a variety of desserts using fruit as main ingredient where maple syrup is added at the dishes, for example cakes Canadians.

In Canada also emphasized his beer and wine from Ontario and British Columbia.