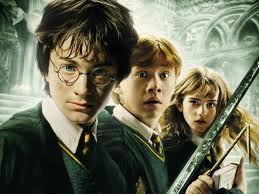 The principal characters in this saga are:

- Harry Potter (Daniel Radcliffe) is the protagonist of the story. He is "the selected". When I was little, Voldemort killed his parents. Since then, he had to live with his uncles who treated him badly. At age 11, Harry went to Hogwarts, a school of magic and witchcraft, where he spent seven years of his life. He is thin, disheveled black hair, wears glasses and has a scar on his forehead in the form of lightning.

- Ron Weasley (Rupert Grint) is the best friend of Harry. He is a bit clumsy. he is tall, he has redhair and is intimidated by the achievements of his brothers. He has a very large family. In my opinion, is the most funny.

- HERMIONE GRANGER (Emma Watson) is Harry´s friend too. She is very intelligent. She and Ron help Harry to fight against Voldemort. Her parents aren’t magicians, so the others always make fun of it.

-LORD VOLDEMORT . Initially it was a powerful magician drawn to the Dark Side, which became more afraid of the black magician of modern times. He was defeated a decade ago after killing Harry’s parents, but "was not human-enough to die," so that their return is a frightening possibility. The wizards fear and avoid calling your name, and usually refer to him as "He Who Must Not Be Named", the "Dark Lord" or "who you know."